I wanted to do a quick post just to let readers know about a commenting system I put up on the site. Its a bit different from the standard blogger fare in that you can directly reply to other peoples comments and attach pictures as well. Hopefully this will allow the blog to become more of a communty where we can all discuss with each other. The attachment feature is great because it can allow us to share unseen pictures as well! 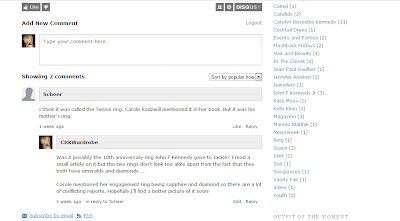 I've had a few people comment already which is so great to see when one starts up a new site. I know there are a lot of CBK fans out there so it would be great to hear from everyone. And a big big thank you to the ones who have left nice notes and visited the site :)
Posted by T at 1:57 PM No comments:

For this weeks Flashback Friday I thought we'd go back to the late, when the hair was wavier, the skin darker and Carolyn wasn't known as Mrs. JFK Jr. but rather Calvin Klein's PR girl.

After graduating from Boston University in 1988 Carolyn worked as a salesgirl at their Boston location before being located to Manhattan to work in PR. While there she mingled with the best, including Jennifer Aniston, Kate Moss and Mr. Klein himself. But her most important connection would have been JFK Jr. One of the most frequented stories is that John and Carolyn met at a Calvin Klein event.

While at Calvin, Carolyn's look was still very fresh-out-of-college. Her hair was wavy and dirty brown and the skin was tanned - two staples we never saw in Carolyn's later life. But the clothes are still simple and modern so I guess Carolyn always dressed to her own tune.

Anyways, I've collected a bunch of pictures that you can see below and I think they only further intensify what people thought of Carolyn. She was a fun and social girl who was able to party with the best of them, not the ice queen that the media made her out to be. 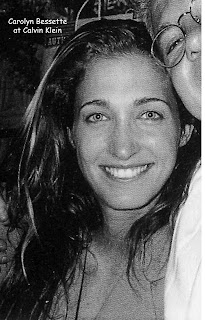 The pictures below the cut are screencaps from an A&E documentary. I've scrolled the web and youtube but I can't for the life of me find the video! If anyone has a link or even more pictures please let me know!

I thought I'd introduce a fun aspect on this blog and something to look forward to - Flashback Fridays. The site is still starting up so I know it needs a bit of work but at least every Friday before the weekend I'll post an old picture of Carolyn. And by old I mean pre-JFK Jr. days when the hair wasn't so blonde and the clothes not so perfect. 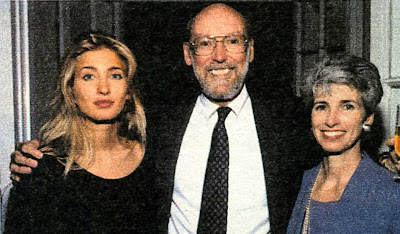 This is Carolyn with her mother Anne Freeman and her stepfather Richard Freeman*, most likely during her early Calvin Klein PR days. Carolyn looks so much like her mother - agreed?

UPDATE* : The man above is actually Richard Freeman, Carolyn's stepfather, not her biological father as I initially stated. Her parents divorced when she was eight and they both remarried to new partners. Thanks Ana for the tip!

In 1996 fresh from their honeymoon in Turkey John F Kennedy Jr. introduced his new wife to the press. The newly hyphenated Mrs. Carolyn Bessette-Kennedy stepped out from her NYC apartment and suddenly all eyes were on the newest inductee to the Kennedy family. 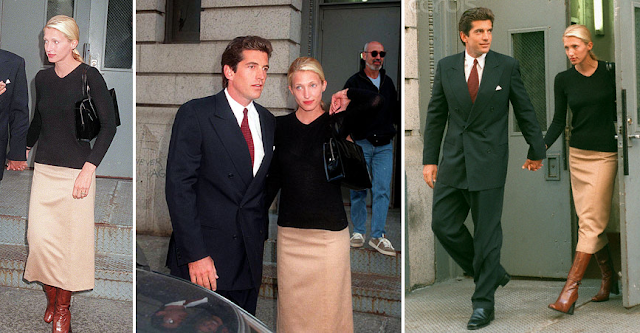 I loved this outfit for many reasons. First, because of the colour palette. I'm a simple girl, black and camel account for about 60 percent of my wardrobe, so I loved that Carolyn combined the two colours here. Second, her hair and makeup is flawless and although you can just see how uncomfortable she is facing all those cameras and lights (who wouldn't be) she is so quintessentially Carolyn. And lastly, the fact that this outfit is so timeless. Who doesn't see woman at work trying to embody this simple and streamlined look in the office? A sweater, skirt and boots combine to make a powerful first statement.

As always, click the "Read More" link for all pictures
Read more »
Posted by T at 11:31 PM No comments:

In 1996, fresh off her marriage and honeymoon and just settling into life as the new Mrs. JFK Jr., Carolyn appeared on the cover of the October 21, 1996 issue of Newsweek - the headline read "The Carolyn Style". The article, at times enlightening and at other times condescending, summed up the elements of Carolyn's look from her buttery blond hair to her wardrobe of Calvin Klein and Yohji Yamamoto. Its a really interesting read with some great pictures. 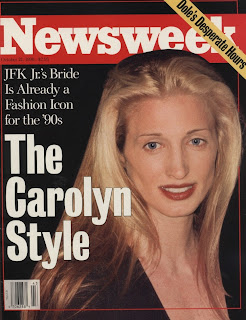 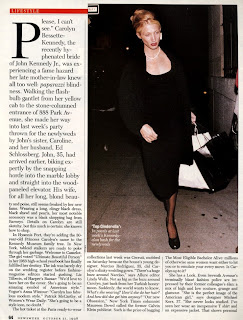 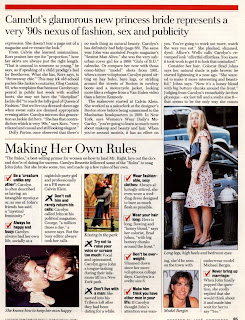 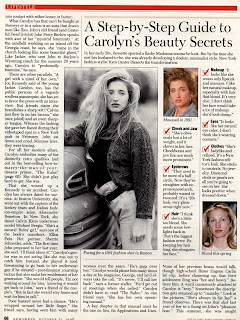 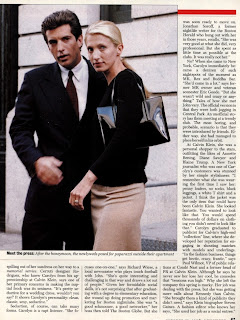 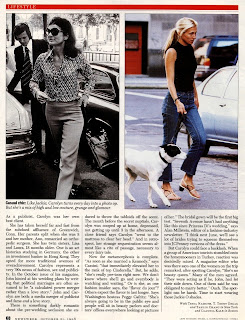