My cousin is getting married this weekend and fortunately, or unfortunately depending on how you see it, I get to be a bridesmaid! Thankfully, the dress isn't bubblegum pink and there aren't any bows (in plain sight) but sadly I don't think it can top this outfit Carolyn wore to a 1998 wedding in Italy. A close friend of John's, diplomat and journalist James Rubin wed anchorwoman Christiane Amanpour in Bracciano. The couple married in a low key wedding and invited some decidedly high profile guests.

Carolyn wore a black ruffled Yohji Yamamoto cocktail dress, patent black Manolo Blahnik heels and accessorize with a black leather envelope clutch. Jewellery was kept to a minimum (pearl earrings) and her hair was pulled back in a low chignon. These heels have got to be one of my favourite pairs of shoes on Carolyn. I love the straps on the back. They were probably Carolyn's favourite too seeing as how she wore them to more than one black tie event.

The whole look was very classic and I still see women dress like this today. To me Carolyn looks more like Italian aristocracy than a fomer PR girl for Calvin Klein! And like always, she kept her makeup very simple and opted for just red lipstick and mascara.

I don't know if I'd be bold enough to wear black at a wedding. These days guests always steer in favour of pastel colours ... would it be something you'd try?
Read more »
Posted by T at 2:32 PM 1 comment: 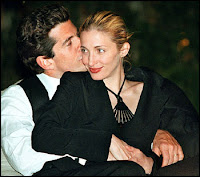 On Saturday, May 1 1999 John and Carolyn attended the annual White House Correspondents Dinner. Sean Penn was their guest and he, along with Carolyn and John, added some high wattage celebrity presence to the event.

Carolyn wore a beautiful Jean Paul Gaultier pantsuit and necklace and had her hair slicked into a ponytail. Makeup was minimal and she stuck to her tried and true red lipstick and a bit of liner.

This is one of my favourite CBK event outfits, although I find myself saying that a lot, because it is still so modern today. I even remember seeing a similar JPG pantsuit on the runways a few seasons ago but alas I can't find that specific collection.

Anyways, to see all of the pictures I've gathered from this event click the "Read More" link! And if you have any photos to add please let me know :)

One of Carolyn's greatest distinguishing features was her beautiful blonde hair. It was the perfect compliment to her austere wardrobe and added a touch of lightness to her all black ensembles. Emulated by many Manhattanites but unfortunately overshadowed by the clunky "Rachel" do, CBK's cut and colour was one of the top nineties hairstyles.


Interestingly enough Carolyn didn't start out with platinum blonde hair. Her foray into Scandinavian blonde territory started out in a completely different place. When she met John her hair, and Carolyn herself, was very "out of university" - tousled, dirty blond and curly, as if she spent her days in Manhattan surfing. It was only when she became Mrs. JFK Jr. that she became blonder, perhaps to accompany her new role. Below is a really interesting article on CBK's style by her former hair stylist Brad Johns:

It has become a well-established fact among people who follow such things that Brad Johns does Camelot princess Carolyn Bessette-Kennedy's hair. And how does he do it? "I cut Carolyn Bessette's hair in a private room," Johns told us. "The haircut usually takes around 45 minutes, and my fee is $300, the same for all my clients.

"We have great security, walkie-talkies and microphones everywhere," he said. "No one can get past our security. So when Carolyn makes an appointment, we just whisk her in and out." Johns let down his guard just a little to let us know that Carolyn used to go for "a surfer look, tousled and sexy, like a little kid at the beach."

"Since John Kennedy married her, she became more regal," Johns said. "So now I make her hair a paler blond with a hint of Grace Kelly demureness, which is how she wants to present herself."

Carolyn is a wonderful client, according to Johns. "Of course we are chatting all the time, usually about her pets," he said. "She has a little kitten that she adores."

"I want Carolyn to look like her hair was naturally lightened by the sun. She says that she would like to spend a ton of time in the sun ... but at this point she is so hounded by paparazzi that it is impossible for her to go out in the sunshine as much as she wants."

There aren't too many pictures of Carolyn wearing her engagement ring and the ones that I do have are quite blurry. However, I'll post these two pictures for the sake of seeing the ring John Jr bequeathed to his future wife. It is a platinum band surrounded by diamonds and sapphires. The sapphires are quite surprising as I would have pictured CBK as a simple diamond type of girl. Coloured gemstones are not quite my taste but the ring is a beautiful piece of jewellery. I'm not too educated on this topic but perhaps the ring was passed on from Jackie to JFK ... does anyone know?

Unfortunately the ring wasn't to C's particular liking, according to Carole Radziwill, in her book "What Remains". I could see Carolyn as just a simple gold band kind of girl but this piece of jewelry was exquisite nonetheless.

*Update* Carolyn's ring was modeled after one owned by Jackie Kennedy. It was one of Jackie's favourite pieces - her "swimming ring" - given to her by her long-time companion, diamond dealer Maurice Tempelsman.

*Update 2* I've gotten a chance to read RoseMarie Terenzio's book 'Fairy Tale Interrupted' and there was an interesting back story on Carolyn's ring. Apparently, Tempelsman had a hand in creating CBK's ring as well. RoseMarie, John's assistant, picked up a package from Maurice Tempelsman's office (not knowing the package was the ring!) and John kept it in a Duane Reade plastic bag in his office desk. He eventually proposed to Carolyn on July 4 weekend (1995), while the two were fishing at his house in Martha's Vineyard. His choice words? "Fishing is so much better with a partner".

The ring Tempelsman designed was a replica of an emerald and sapphire Schlumberger ring that Jackie had owned. If you have around 10k to spare then you can pick yourself up a similar version at Tiffany's! The sapphire and diamond version is below - I love that John changed the gemstones to fit his future wife but still kept his mother's influence.

Thanks to Jessika for the update and the Ultimate Jackie blog for info as well!
Posted by T at 10:52 PM No comments: 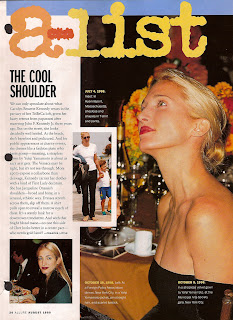 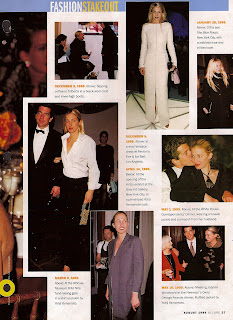 They are great scans and include some great quality pictures of some of CBK's best hits like the ruffled Yohji Yamamoto and her white Versace number. Its a good quick read and I find it really describes Carolyn's style well. If you're interested in buying the magazine for the article Sharon Stone was on the cover!

source: scanned by Luxx at tFS
Posted by T at 4:21 PM No comments: